Español
"All religions are precious jewels on the golden thread of divinity."
​​Samael Aun Weor﻿​​
Gnosticism:
​
"The belief in the presence of a spark or flash in man, that comes from the scope of the divine and that in this world is found subject to destiny, birth and death. That divine spark must be awakened by the divine counterpart of the human I in order to finally be reintegrated to the place where it came from.
The word "gnosis" is Greek and means "knowledge"; the noun of the verb "gignosko," "to know." Within the framework of the history of religions "gnosis" is understood as the knowledge of something divine that transcends all faith, an immediate and absolute "science" of the divinity that is considered as the absolute truth. The cultured Castilian term "gnosis" is used exclusively in the restrictive sense that it had later on in the Greek language: "perfect knowledge," as opposed to "ordinary knowledge"...Francisco García Bazán, The Eternal Gnosis

"Gnosticism is not only about believing a certain doctrine received by the tradition, but "To rise to the intimate revelation and to confirm in oneself the reality of that doctrine." Rafael Vargas
​
"Gnosis is a very natural function of the Consciousness, a Philosophia Perennis et Universalis. Gnosis is the intelligent principle, that in each age, is hidden in symbolism, and which, in a philosophical form, responds to these three eternal questions: Why? How? Where?" Samael Aun Weor 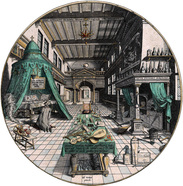 The Alchemist In His Laboratory
​A School dedicated to the PRACTICAL STUDY of Gnosis and the path of the Self-Realization of the Soul.
​
All of the ancient spiritual traditions without exception teach us techniques to EXPAND our perception of reality. All the problems of humanity stem from having an INCOMPLETE VISION of the totality of life in a given moment, not just from "false" or wrong concepts...as the ancient Hermetic Principle states: "All truths are half-truths. All lies are half-lies."

As Gnostic Master Samael Aun Weor states: "The person who created the terms "good" & "bad" did a great disservice to humanity."

Gnosis invites us to expand our consciousness through scientific techniques like Meditation, Mindfulness, Prayer, Astral Travels, Lucid Dreams, Sexual Transmutation, etc., to have a broader perception of ourselves, life, and the universe. An entirely new life opens up for the practitioners of this Occult Science, allowing one to "step outside the box" and go beyond the current limiting perceptions that one carries inside. This process has been referred to by all spiritual masters as "AWAKENING."

The Gnostic teachings are based on the communion between science, art, philosophy and mysticism; they seek to rescue the highest values of the human being in order to be able to comprehend that life is empty without the pursuit of transcendence and the self-realization of the Being.

Gnosis is the eternal cosmic principle, clothed in the religious forms of each race, people or culture and according to the idiosyncrasy of each age. It is a doctrine of synthesis with values that are completely its own and which allow the sincere seeker to discover the essence of the universal knowledge.

"Speaking very frankly and in plain language we will say, "Gnosis is a very natural functionalism of the consciousness; a Philosophy Perennis et Universalis."
​Samael Aun Weor

Glancing through history, we can contemplate in an astonishing manner the continuous effort carried out by the divinity through the White Lodge and its Masters of Wisdom, to grant real opportunities to all the Beings that impel their sparks through the path of regeneration. We can affirm, without fear of being mistaken, that always, in every moment, in a more or less public or secret way, and throughout time, in all places, humanity has had the gnostic opportunity at its reach. That is to say, the opportunity to enter into the mysteries of the science of the Being's Self-realization.

If we look back in a reflective manner, we verify that these mysteries of universal gnosticism were known in different times in all the preamerican cultures which vibrated intensely with the Mayan and Toltec rays. Olmecs, Zapotecs, Quechuas, Incas, Koguis, Lakotas, and even the Mayan and Toltec descendants held in their time the keys of the Great Arcanum which will be unveiled in this book through the writings of primitive gnosticism. At the same time, and also in different epochs, initiatic schools existed in Egypt, Tibet, China, India, and even in the Europe of the Druids (children of the serpent) and of the Nordic Mysteries. The serpentine wisdom of the Chaldean people (magicians of the fire), of the Assyrians (heirs of Osiris-Sirius), of Mesopotamia, Etruria, is proven and let us not forget the Greek mysteries. Later on, as we will verify throughout this work, those keys of the ancestral wisdom were revitalized by the Hebrew initiates, the primitive Gnostic Christians and, following their example, by all the schools of regeneration that came later: Islamic Sufism, Bogomils, Cathars, Templars, Builder Lodges, Medieval Alchemists, Freemasons and Rosicrucians. And through them—although not exclusively—and through the incarnation of the Avatar of the Era of Aquarius, the V. M. Samael Aun Weor, by means of the Contemporary Gnostic Movement, the  keys arrived once again to the five continents, as the grand finale and the call to order to the reluctant essences that still, in spite of being impelled by their Monads, have not carried out the gnostic opportunity within.

"Today we have a Gnostic movement in the anonymous masses which is the exact psychological counterpart of the Gnostic movement nineteen hundred years ago. Then, as today, solitary wanderers like Apollonius of Tyana, spun the spiritual threads from Europe to Asia, perhaps to remotest India."  Carl Gustav Jung

Taken from the book: Gnosis Tradition and Revelation, by Rafael Vargas
PLEASE SUPPORT OUR MISSION
​
If you benefit from what you find here, make it possible for others to benefit too. Please consider supporting our non-profit organization with a recurring monthly donation: